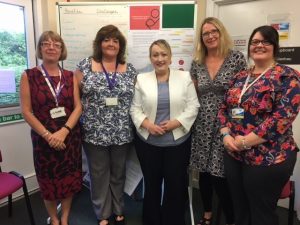 Sam Morgan, Torfaen Direct Payment Support Service (DPSS) Manager, was invited by Torfaen County Borough Council to be part of a group meeting Rebecca Evans AM, Minister for Social Services and Public Health, to discuss among other things, direct payments.

Sam, who works for Services for Independent Living (SIL), was present because of the work she and her team deliver alongside Torfaen CBC.

The visit was sought by the Welsh Government after the implementation of the Social Services and Wellbeing Act and Zoe Williams, Torfaen CBC’s Independent Living Broker, organised the meeting which took place on the 23rd August so that the Minister could discuss several issues including the new patch based teams; the benefits and challenges of Direct Payments; and the working relationship between the local authority and SIL, which has benefitted Direct Payment recipients in Torfaen.

The Minister visited for an hour with her assistant David Clayton and as well as Sam and Zoe she met other officers from Torfaen CBC working within Adult Services.

The meeting was very positive and the Minister was very pleased with the work that Sam and Zoe had put into the PA Online Guidebook. She also acknowledged the excellent work practices happening in Torfaen following the implementation of the Act and was interested to learn about some of the new challenges facing local authorities and how Torfaen CBC and SIL are working together to overcome them.

The meeting was a very positive experience felt by all who attended.