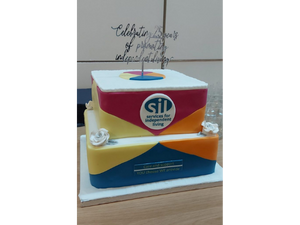 SIL marked a significant milestone this year with an extra special AGM and awards.

To celebrate our 25th Anniversary we pulled out all the stops to deliver an extra special AGM with special guests, a towering cake and film show.

The AGM was opened by Marion Tweed-Ryecroft. Marion was SIL’s first employee and helped a group of disabled people and carers way back in 1996 to gain support for a Direct Payments pilot in Herefordshire.  At that time very few local authorities were running them but this new approach to social care would allow disabled people to control their own care and support by allowing them a pot of money to buy in the services they want rather than being ‘prescribed’ a care package.

Marion spoke fondly of her time at SIL and about the amazing work we still do now to promote wellbeing and independence amongst our service users.

With the formal business underway it was Chairperson Angie Higham that was the first of the day to commend employees and trustees for their work over the last 18 months during the worst of the covid pandemic. How everyone pulled together and worked with determination, compassion and fortitude.  SIL went through some difficult times especially when over 40% of the Homecare team contracted the virus.  Due to the willingness of the rest of the team and support from ILH no shifts were missed and the care of all service users was maintained.

Trustee and Treasurer, John Rogers spoke of the financially secure position the business holds and how we are well placed to be able to continue to grow and develop the business.  This will ensure that we continue to put service users at the heart of what we do and expand our offer to them.

A item of core business at our AGM is the approval of trustee appointments and we are delighted to say that Trustee David Hughes is continuing for a further term. Angie Higham is to stay as Chairperson and will be supported by Shirley Mackay and Julie Thornby as Joint Vice Chairs and John Rogers as Treasurer.  These were unanimously approved by members present.

CEO Euan closed the morning session recognising the amazing contribution of everyone across the business.

The AGM morning session including Chair’s report, Treasurer’s report, voting and resolutions and CEO’s report can be viewed at: Session 1 (The AGM) https://youtu.be/fCyl712mAZo

For this years awards ceremony we introduced a few changes;

Independent Living at Home (ILH) Registered Manager, Lisa Bradley kicked off our awards ceremony with the ILH awards which you can view at Session 2 (Awards Ceremony) https://youtu.be/x9ll24w-FDo

The winner of this award was Pauline McLaughlin with runners up Joyce Taylor and Ruth Davies.

The winner of this award was Zara Cook and the runner up was Emma Bird.

The winner of this award was Donna Tranter and the runner up was Katie Loughran.  This is the second year running that these two have been placed in these positions.

Homecare Registered Manager Tara Jones was on hand to present the next award for her service area. Tara closed the first section of the awards with a tear jerking thank you to her team, with particular thanks to Jade Perks, Homecare Co-ordinator who she credits with getting her through the worst 12 months.

The winner of this award was Carolyn Layton and the runner up was Rebecca Guerin.

You can read about all of the winners and runners up in the AGM Programme to see why they all are worthy of their awards.

Traditionally SIL awards have recognised excellence in our care providing teams as it receives so little acclaim elsewhere.  One of the positives to come from the Covid-19 pandemic is that the care sector is now receiving much more recognition for it’s value and we have proudly and diligently lived up to the keyworker title.

We continue to recognise excellence in our care teams but with this celebratory event we wanted to acknowledge the outstanding people that are part of the wider SIL team and those that support and care for people outside of our workforce. To that end we have introduced 5 new awards:

Nominations were sought from our DPSS users and family members for their support staff or personal assistants; those that they feel are the best example of what an outstanding PA should be and the winner was Jackie Innis as nominated by Dr Choesang Fenner- Tensin.

Team awards for Outstanding achievement for:

Supporting the growth of the organisation through sound financial management  was awarded to the Finance Team; Mike Moyles and Jennie Jones.

And with all the awards given it was time to celebrate with a glass of fizz and a slice of cake.  CEO, Euan McPherson and our longest standing Trustee Maggie O’Neill were on hand to do the honours and cut the eyecatching and very delicious cake.

Then it was on to the final session of our day, the launch of our new SIL mini movies; showcasing the excellent services that SIL has to offer.  These were produced by Wild Edric Media and starred our brilliant service users and staff.

You can view these over on our Youtube channel at Session 3 https://youtu.be/oSsiIj86jt4

A tongue in cheek special news broadcast very ‘amateurly’ produced by SIL employees Briony and Paula ended the film show.  They brought together a cast of faces old and new to tell SILs story right from 1996 to the current day. With thanks to Marion, Ginnie Jacques, Maggie O’Neill, Service users Sam and Sheila and everyone else who starred in our broadcast.

So all that was left to do was to close the show and say thank you to everyone for the last year, for taking part in our AGM and films, for helping to plan and put on our AGM and so much more.  As Euan remarked in his closing statement and look to the future “We just need to keep on doing what we’re doing.”

We are passionate about supporting disabled and older people to live the life they choose in their own home and community. 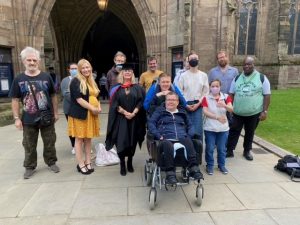 Services for Independent Living (SIL) is celebrating the success of two of their employees who have graduated with a Level 5 Diploma in Leadership for Health and Social Care, Adults, Children and Young People’s Services.

Lisa Bradley, the Registered Manager for SIL’s Independent Living at Home (ILH) service, and Donna Tranter, an ILH Team Leader, spent over two years studying for the qualification.  They were rewarded for their efforts when they both found out they passed earlier in the year.

Unfortunately, Donna was unable to attend the graduation ceremony which took place last week in Hereford Cathedral, but Lisa went along to fly the flag for SIL and be a part of the event hosted by Herefordshire & Ludlow College.

The Ceremony was opened by the Chancellor, Reverend Canon Chris Pullen, and guests were welcomed by College Principal David Williams before an address by Deputy Provost Ann Jordan.

A huge surprise for Lisa was that a number of SIL’s service users went along to wish her well and share her special day. Lisa said: “I was really emotional when I saw them all there – everyone else seemed to have family with them….so I felt lucky that I had my work family!”

SIL actively encourages and supports its employees to undertake personal and professional development, recognising that not only is this beneficial for individuals but it is also good for both the organisation and service users.

Lisa added: “SIL was very supportive of me during the time I was studying and it was especially useful to be able to draw on the experience of service users and support workers to help me complete assignments.

“The research into the legislative side of management allowed me to develop my level of competence in that area. I already had extensive management training and experience, but this focused my mind on how to use these skills in a Social Care setting.”

Donna agreed with Lisa and added that gaining this qualification has opened her career opportunities in social care.